Master Gardener Cindy Haines began donating leftover produce to area food banks in 2003. “We lived on a farm,” said Haines. “My husband Jim had a very productive vegetable garden and we were trying to figure out what to do with it.” Rather than compost the extras, they gave it to local agencies who made food distribution part of their mission.

In 2008, Haines connected with Ann Weike, a professor at the University of Kansas who had set up a bin at the Lawrence Farmer’s Market for farmers to deposit their leftover produce. Weike then transported the produce to Just Food, which was then a fledgling food distribution organization. Haines, Master Gardeners Ken Lohrentz and Larry Gadt as well as community members Forrest Swall and Ace Hickey began assisting Weike in this endeavor. In 2009, the Master Gardener Board of Directors established the Produce Distribution Committee to allow Master Gardeners to earn volunteer hours by collecting produce at the Lawrence Farmer’s Market and distributing it to Just Food. “We arrive each Saturday with about twenty crates,” said Master Gardener Karen Johnson. “We walk among the vendors, collect their donations, and then load the crates into trucks to transport to Just Food.”

“Farmers are not allowed to re-sell produce after the market. The vendors welcome us because it means their produce will not go to compost,” explained Haines.

“A lot of people in Douglas County don’t realize that there are people in need,” said Gadt. “There is a lot of produce that winds up in the compost bin, and this committee makes a connection between the two things.”

Master Gardener Stew Grosser added, “We’ve been able to draw a lot of attention to the needs of Just Food just by being here and collecting donations for them. Farmer’s Market vendors save their leftovers, and if we miss a Saturday they ask us where we were.” 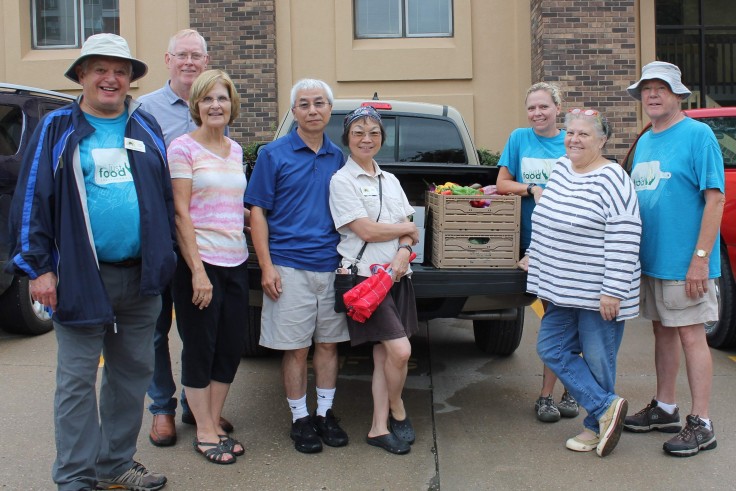 The camaraderie among the crew is noticeable. “It’s a feel-good project but it serves a purpose,” said Haines. Current co-coordinator chair Dana Chance added, “It takes about an hour and a half to pick up the produce and deliver it to Just Food. This is not a big time commitment on a Saturday, but it yields a great result. It’s unique because the farmers are helping Just Food patrons access fresh produce.”

From May to August 2019, Master Gardeners have collected 3,689 pounds of produce. On August 24, 2019, they collected 462 pounds, which was the highest of the year. “During the peak season, we usually collect between 300 and 400 pounds each week,” explained co-coordinator Sandy Rickards. “When we open the cooler each Saturday to make that week’s delivery, the produce from the previous week is always gone.”

The Master Gardener Demonstration Garden at the Douglas County Fairgrounds has also recently began making donations to Just Food from their garden. “This is the first year we’ve had enough to give. We replaced an herb garden with a plot for vegetables and built a fence around it to keep out the wildlife,” said Master Gardener Jim Blom. “We also added a second plot where we’ve planted fall vegetables like radishes, broccoli, cauliflower, turnips, spinach and carrots.”

“Over four weeks, we’ve been able to donate thirty-three pounds of produce, including cucumbers, kale, peppers, okra, beets, garlic, onion and potatoes,” said Master Gardener Debbie Zabel. “We hope to add to that total as our garden yields more.”

If you are interested in becoming a Master Gardener, please click the “Apply” tab on our homepage.