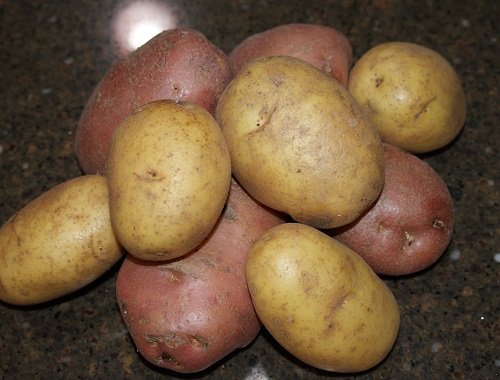 I haven’t even gotten my seed potatoes yet. But never fear, March 17 is just a target date, not a brick wall.

Some of my strongest childhood memories are of harvesting potatoes. After my dad took the disc through the potato patch my siblings and I were charged with pulling out the freshly revealed tubers. Our feet sunk into the soft earth as we dug through the dirt with our fingers. The potatoes went into the root cellar. By the end of winter, those that were left had started to shrivel and sprout. We ate them, anyway. Raising five kids on a farm, you don’t waste food just because it’s ugly and a little rubbery.

Although I grew up in the potato patch, I haven’t grown them myself on a regular basis, and not for a number of years. So I’m learning all over this year.

Thousands of years ago predecessors to the Andean Incas in South America began digging up these plants for the nutritious and colorful little tubers they grew. The original potatoes were smaller than those we plant in our gardens, more like the fingerling varieties of today, and more varied in shape and color. At least 20 different species exist, along with thousands of varieties, most of which are grown only in the Andes today. This link takes you to an image of various potatoes still grown in their native region https://www.facebook.com/99206759699/photos/a.138830229699/10159045024789700/

Ancient Incas fermented and dried potatoes to create a food stuff that would keep almost indefinitely. Doing this and storing potatoes from an abundant crop gave them food security. They could go to that stash when crops were poor and avoid famine.

Potatoes grown in the U.S. and Europe largely come from just one of the species found in the Andes, Solanum brevicaule, but breeding has created hundreds of varieties. We can find potatoes with white flesh, golden flesh, purple flesh and even red flesh, as well as those with various skin colors.

Not only do potatoes come in different colors, they also have different culinary uses, as some are better for baking, some for mashing and others are multi-purpose. Disease tolerance and resistance also varies, which is important. The Irish potato famine in the mid-1800s occurred because the Irish had become extremely dependent on this South American staple, and they planted potatoes with little genetic diversity, so a disease wiped out much of the crop.

Potatoes also come in early, mid, and late season varieties, stretching the harvest out over the season. The following varieties are on the Kansas Recommended Varieties list, which lists recommended varieties for many other vegetables, as well as potatoes. You can find this publication (L41) at the Kansas State Research and Extension Bookstore, https://bookstore.ksre.ksu.edu/

You will notice that Yukon Gold, which seems to be a favorite variety in grocery stores, is not on the recommended list. Neither are any of the other more exotic varieties, such as those with purple or red flesh. That doesn’t necessarily mean they won’t grow well here, just that K-State Researchers either haven’t tested them, or the varieties are too new for their tests to be conclusive. I’m going to plant whatever varieties are locally available, even if they’re not on this list. You will find more variety through online sources, but they are far more expensive, and the companies I checked don’t start shipping before the prime planting time in northeast Kansas, which is mid-March.

“Seed potatoes” are not actual seeds (although you can find potato seeds from some sources), but are the tubers themselves. Cut the seed potatoes into pieces no smaller than 1.5 ounces (from an eight-ounce potato you can get five pieces), with each piece containing at least on “eye.” (They might be watching you.)

An eye is a natural depression on the surface of a potato from which new growth will sprout. If you’ve ever kept a potato in the pantry for too long you’ve seen this sprouting. Some sources recommend at least two to three eyes per piece. If a seed potato contains many eyes, it may be tempting to cut it into really small pieces, but if the seed piece is too small, the seedling that sprouts will be weak and may succumb to any freezing weather that follows planting. Potato foliage will burn if exposed to freezing weather but it shouldn’t kill the plant.

Do not forgo the “healing” process after cutting up your seed pieces. To heal, store them in an open container, out of light, at a humid (if possible) room temperature for a five to seven days. This allows the cut edges to dry, which will help keep them from rotting in the soil.

Plant seed potato pieces three to four inches deep and eight to 12 inches apart. In large gardens, potato rows traditionally lie three feet apart, but they can be planted closer in small gardens. The square foot gardening model has one potato plant per one-square-foot. So space rows one foot apart and place the seeds one foot apart in the rows. If your soil is loose and loamy, you might want to dig a trench and plant the potatoes in the bottom. In tougher soils, plant them in a slight mound. Plant them three to four inches deep.

However you plant them, you will mound soil around the plants as they grow, starting when they are about six inches tall. You may rake soil from around the plants, use compost, or use hay or straw mulch. Some people place potatoes in the bottom of a trench and cover only with hay, piling it as they grow. I have seen various sources recommend planting potatoes in tubs; put several inches of soil in the bottom of the tub, plant the potatoes, covering the stems as they grow. When harvest time comes, simply tip the tub over, spilling soil and potatoes. You also might find plans for building a box-like structure with individual, removable boards along one side. Place the boards as you cover the potatoes and remove them for an easy harvest.

Covering the stems of the plants as they grow serves two purposes: Since potato tubers are modified stem structures, burying the stems provides more space for the tubers to form along the stem; plus, the additional cover prevents the tubers from being exposed to sunlight, which turns them green and causes the tubers to produce a toxic substance.

Potatoes require regular moisture and full sun, similar to their relatives tomatoes and peppers, except they prefer growing in cooler temperatures.

Potatoes can contract several diseases, so crop rotation becomes important to allow nightshade-specific diseases to die out. The recommendation is to wait a minimum of two, and possibly three years before planting them in the same spot (also avoid planting tomatoes, peppers, eggplants and other members of the nightshade family in that spot). If you have a small plot this may not be possible, however.

Rotation in larger beds also helps reduce populations of one of the most notorious pests of potatoes, the potato beetle, which also attacks eggplant. Hand-picking one way to control this pest, but start early. A new publication from K-State research and Extension provides a look at common potato diseases and pests, as well as providing a thorough look at potato cultivation in Kansas. You can find the downloadable (free) publication here https://bookstore.ksre.ksu.edu/pubs/mf488.pdf

However you slice them, potatoes are among our favorite foods, and they have been cultivated for millennia. Although the potato we know and love originated in the Andes, North America also has its own native potato species, called the Four Corners potato. (Solanum jamesii).

Recent archaeological discovery has uncovered that North American indigenous people used this species of potato more than 10,000 years ago. Starch grains on stone tools found at a site in Utah were identified as belonging to that of S. jamesii. That predates evidence of potato use in South America. What’s more, that potato species still grows in North America, in the Four Corners area of Arizona, thus it’s called the Four Corners potato. Indigenous people there still use the little tuber.

All hail the potato!